Malacca (or Melaka – in Malay) is on many travelers itineraries as it’s a logical stop off on the way traveling via land thru Peninsular Malaysia to Kuala Lumpur.  It’s a quaint little town with a relaxed vibe and a Black Muddy River slicing thru the town.  (check out video below of this Black Muddy River).

On one side of the river is the Dutch-era buildings and the other side is Chinatown.  We stayed in the Chinatown area with its funky little old streets, which were fun to stroll around.  The area received a UNESCO World Heritage designation in 2008 along with Georgetown in Penang which we will be visiting next month.  The good thing about a visit to Malacca is the areas of interest to tourists are quite compact with many sights easily explored on foot.

Malaysia has alot of world-class food and eating is the thing to do in this country just like Singapore.  Food is so damn cheap and a welcome relief after surviving the exorbitant food pricing in Singapore. (I would say a meal is about 60-75% cheaper than Singapore for an equivalent feast).  Consequently, Barbie and I have been on a mission to try all the dishes that Malacca has on tap.  This is a mission you all should support.

The big food item is the Chicken Rice Balls, the main signature food item in Malacca with many restaurants in on the competition.  It is the ultimate goal of every restaurant that serve up these balls to have the best tasting balls and accrue the Malacca bragging rights that come along with that.  The online reviews vary widely on who has the most tasty balls so it was our mission to search out the best balls and gorge on as many variations of balls as humanly possible before we were ready to explode.  I am going to give the Big Doug Rice Ball crown to Ee Ji Ban Chicken Rice Balls.  The balls were the perfect consistency and the size of the balls were just right.  I also liked that this restaurant flew under the radar and did not get the unwarranted hype of many other restaurants. 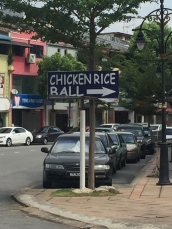 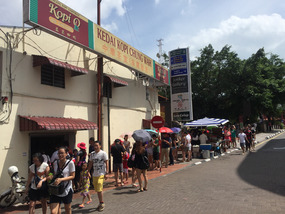 Some of the other big food items and Melacca style treats are:
1) Ice Kachang – the Malaysian version of Hawaiian Shaved Ice,  I get mine without the beans and corn.  Now who the hell puts beans and corn in shaved ice?……..c’mon man.
2) Durian ‘One Shot’ Puffs –  you must eat this in one shot.  It’s a popular desert pastry and it sucked….big time.
3) Laksa – Its a spicy noodle soup with a whole bunch of good tasting stuff in it.  First rate stuff.
4) Dosa – South Indian pancake served with dipping sauce
5) Cendol – Southeast Asian popular desert
7) Peranakan Cuisine – Chinese/Malaysian food mixed together.

The big activity which draws in a ton of people on the weekend is the Jonker Street market.  They shut down the street and you can buy tons of great street food and a whole bunch of assorted crap.  The entire length of the street is packed with locals, tourists, food vendors, street performers and is a great place to simply people watch and eat.  I have been to a ton of street markets on this trip throughout Asia and the Jonker Street Weekend Market is one of the Big Kahuna’s of street markets. 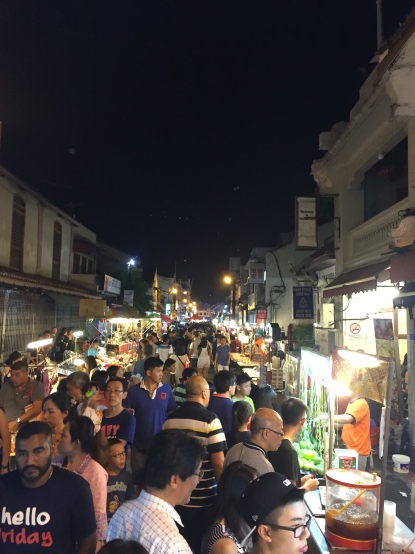 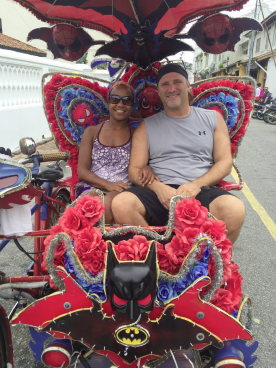 Another big activity is to ride the pimped out rickshaws.  Some even come equipped with stereo systems that blast music as the drivers peddle you around.  These rickshaws take you around town to visit many of the UNESCO Heritage sites.  I really did not want to submit to riding one of these tacky things but it’s the thing to do.  We searched out for the most pimped out rickshaw and we pulled the trigger on the deal.  ($10 bucks for a 1 hr. ride to 9 historical sites).  Being the non-cultural guy that I am, I did not really care much about the 9 historical sites and quite frankly would rather of had the driver take us to nine (9) Chicken Rice ball stands instead.  However, It turned out to be a goofy way to see the sites without having to sweat my ass off walking in the scorching Southeast Asian heat.

We both enjoyed our stay in Melacca.  It’s a good place to inhale a shitload of chicken rice balls, shit them out and then hop the bus to Kuala Lumpur for another food eating marathon.

LOOSE STOOLS INDEX – 8   Things looking up for Big Doug.  The binding properties of the rice in the chicken balls have been a net positive for the stools

THRU THE BINOCS –
Walking around in Singapore, you would rarely receive any eye contact from the locals on either the streets or subways.  The Singaporeans all just zipped around the streets and went about their day in a very professional manner.  They seemed all business to get where they were going, they minded their business and had no real desire to engage with westerners.  However, that completely changed once we crossed the border into Malaysia and the smiles, openness and curiosity rained down on us.  One of the things I find so interesting and enjoy observing during our travels, is the way locals in each country communicate and interact with each other and with westerners.  Entering Malaysia, I have also noticed there are many young Chinese tourists that appear very westernized in their appearance and dress.  In Singapore. at first glance I could not always differentiate between the tourists on holiday from China and the local Chinese Singaporeans which are approximately 75% of Singapore’s population.  However, when looking a bit closer and observing their demeanor, the Chinese locals in Singapore behave in a much more refined, laid back manner than the visiting China mainland tourists who appeared a bit rough around the edges.  So there you have it…..some of my observations, for what it’s worth.