Barbie and I are currently into Year 4 of our RTW journey.  We have visited Australia on three separate occasions simply because the country is so large and there is so much ground to cover.  To give some perspective, the 48 contiguous states of the United States, which excludes Alaska and Hawaii is just slightly larger than Australia.

Australia is big and vast and that is one of it’s great charms.  Traveling Australia by car is a great way to see the country.  Traveling by road in Australia is very safe – I would say as safe as anywhere in the world but you gotta just avoid driving at night in the rural areas because of all the wildlife spontaneously crossing the roads.  Driving past dark here can be sketchy because of the abundance of wildlife.  Nothing ruins a magical Aussie road trip like splattering a kangaroo with your car or campervan, so we kept our eyes peeled and drove only in the daytime.  It is an unfortunate fact of life, but if you are traveling in rural Australia, you are going to see dead kangaroos, wombats, possums, wallabies and assorted other unidentifiable hairy creatures on the side of the road.  That is the downside…..but the real magic begins when going off the beaten path in Oz.

Visitors most often compile an Australia bucket list with predictable destinations, and there’s nothing wrong with that – there’s a reason these places get millions of visitors every year.  However, to see a different side of Australia, it’s best to visit some of the lesser known sites.  We have spent a significant amount of time road tripping around Australia and after this current visit to Oz, I really feel we have effectively covered most of the highlights within this country.  There are six (6) states in Australia:  Queensland, New South Wales, Victoria, Tasmania, South Australia, and Western Australia.  And, Barbie and I were fortunate to have the time to cover them all.

The last state on our list we needed to tick off was South Australia.  This state seems to be rarely visited and mostly overlooked by travelers.  The main purpose for our visit to South Australia was for an extended visit to Kangaroo Island.  Over a third of the island is protected in nature reserves and is home to wild Australian animals like kangaroos, wallabies, sea lions, koalas and a diverse bird life.  If you enjoy the outdoors, adventure, stunning scenery and wildlife, this island delivers on all fronts.  If you are lucky enough to visit and catch warm sunny days on this island, the numerous untouched beaches and sights really shine.  There are at least a half dozen beaches that blew me away and could easily be ranked as some of the best in the world.  That is really saying something as we have seen some amazing beaches during our four years traveling the world.  BFD Tip – for some comfort, make sure to pick up some cheap folding beach chairs, umbrella and cooler in Adelaide prior to coming to the island.  These beaches have no services.  There is no sipping Pina Colada’s with pretty colored umbrellas on these beaches.  It’s just you and mother nature.

Our visit to the island was perfectly timed with the Kangaroo Island Horse Racing Carnival.  We spent the day betting on the ponies at this low key country track and enjoyed the festivities hanging with all the local Aussies that flocked in for this event.  I would venture to guess the majority of travelers do not even know where Kangaroo Island is located or have even heard of this place.  Big Doug is here to tell you a bit more about this little gem of a place.

After our stay in Burleigh Heads on the Gold Coast of Queensland, we hoped on a flight to Adelaide in South Australia.  We spent about a week in Adelaide and based ourselves in the beach town of Glenelg.  Adelaide is the most laid back of all the major Australian cities.  It was a nice, relaxed city to explore but I would have to say the only reason to visit is to use it as a jumping off point for Kangaroo Island.  It’s a 1 1/2 hr. drive south from Adelaide to the ferry departure point in Cape Jervis.  We took our rental SUV onto the SeaLink ferry for a 45 minute journey and spent eleven (11) nights on the island.

Kangaroo Island is the 3rd largest island in Australia.  Because of it’s size, we wanted to limit the driving to the major sights and beaches so we broke up our stay to three locations in different parts of the island: Stokes Bay, Vivonne Bay and American River. The ferry arrives into Penneshaw, which had a nice beach but I would not recommend staying here as the drive to the island sights are too long.  The main town on the island is Kingscote where basically all the services are located.  This was the hub to pick up our groceries and fill up with gas.  I would not recommend basing in Kingscote either.  However, I would highly recommend a visit to the kick-ass takeaway bakery in Kingscote called Rabbitt Warren Bakery.  I will have to go on record and claim Rabbitt Warren bakes some of the best Aussie meat pies and deserts in all of Australia.  Every time we drove into town to grocery shop and fill up with gas, Rabbitt Warren was an obligatory stop to fill our bellies.

STOKES BAY AREA (NORTH COAST):
When initially researching Kangaroo Island, I stumbled upon a place called Waves & Wildlife Cottages.  The pictures I saw on the internet were of modest looking cottages but the selling point being, they were surrounded by kangaroos.  Cooling out for four nights chilling with the Roos sounded perfect.  We were sold.  Barbie, being the animal lover that she is, was in absolute heaven.  She basically spent four days chopping the carrots and apples carefully crafting a buffet feast for the roos that would put the Vegas buffets to shame.  The roos absolutely loved her and she loved the roos right back.  100% of her attention went directly to the roos and sadly, Big Doug was basically neglected for these four days but I was cool with it.  I basically had to drag her out of the cottage each day so we could visit the sites in the area.  Fortunately, her gang of roos were patiently waiting for us everyday upon our return.

In the area, we visited and chilled on 3 amazing area wild beaches that are must visits: Western River Bay, Snelling Beach and Stokes Bay Beach.  Western River was a real standout beach.  It’s a little off the normal tourist trail, but so worth the drive thru rolling green farmlands.  Snelling Beach and Stokes Bay Beach were also perfect places to hang out on a sunny day.  (Tip: at Stokes Bay make sure to walk thru the rocky cave passageway that opens out to an expansive hidden sandy beach). 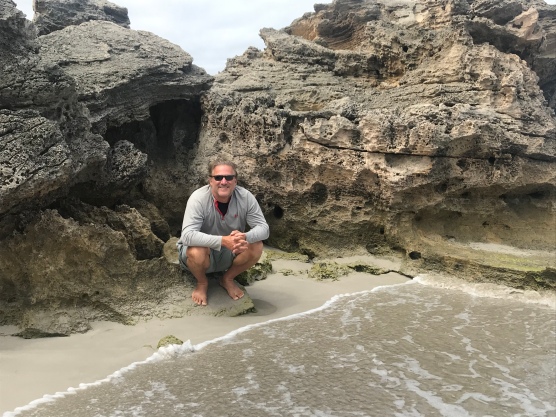 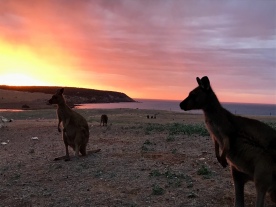 There are a bunch of highly touted wildlife parks on the island (Kangaroo Island Wildlife Park, Hanson Bay Wildlife Sanctuary, Raptor Domain, Kelly Hill Conservation Park).  Despite these parks being well regarded, we never felt the need to pay to visit them as there are tons of animals running wild around the island in their natural habitat.  However, we did ante up and paid the $10 bucks to do the self-guided boardwalk at Seal Bay Conservation Park.  Not sure if it was the time of day we visited, but there were a shitload of seals on the beach right in front of our eyes.  We especially enjoyed the seal fight that broke out….some real National Geographic seal shit going down.

VIVONNE BAY (SOUTHWEST COAST) –
I wish we spent more time on this end of the island.  We stayed in such a cool Airbnb cottage in the woods surrounded by wildlife and down a dirt/gravel road from Vivonne Bay Beach, an awesome stretch of beach.  Hanson Bay, the other area beach on the west side of the island is first rate and a worthy place to hang out all day and simply veg out.  Most of the best sights here are located in Flinders Chase National Park.  The must-visits in the park are Remarkable Rocks, Admiral’s Arch, Weirs Cove & the Snake Lagoon Walk.  The other site to visit in the area is the towering sand dune called Little Sahara.  We chose to walk up the dunes but if you want to spend some money and take the risk of breaking your neck, you can rent a sand board (kinda like a snow board) and ski down the sandy dune.  We watched many young guns showing off, wiping out and eating buckets load of sand. 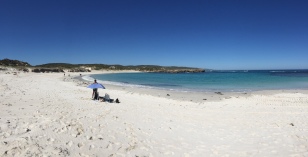 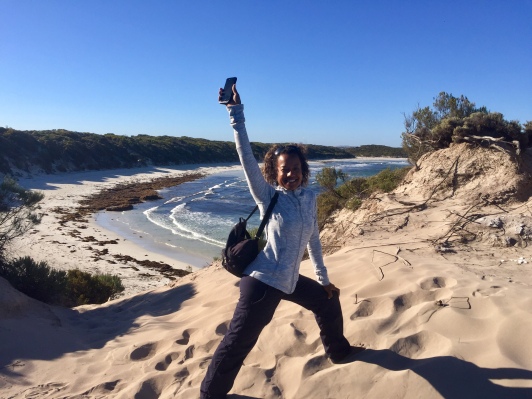 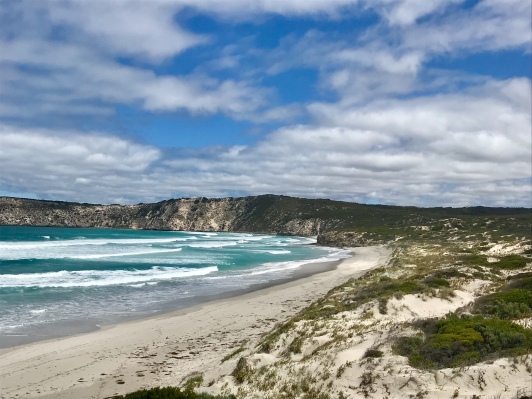 AMERICAN RIVER –
The American River area is a bit more developed but we actually preferred the other locations on the island which were more on the wild side.  However, American River was strategically located and close to some good beaches on our radar: Island Beach, Pennington Bay Beach.  A bit further out, near Kingscote where we get our yummy meat pies, is Emu Bay.  It was a fun beach because we were able to drive our SUV rental right along the sandy beach which was similar to our experience on Fraser Island.

Barbie and I both loved Kanagaroo Island.  It was a very special ‘off the grid’ experience.  So glad we made the effort to visit as this is one of those travel experiences that become etched in your mind forever.  Now, our roadtrip continues and it’s onto the Great Ocean Drive with a few day stopover to break up the drive at Grampians National Park.  We will be slowly working our way to Melbourne taking in the tons of world renowned stops along the Great Ocean Drive. 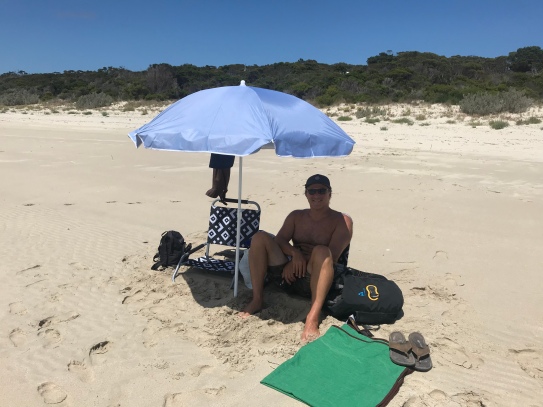 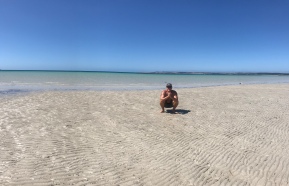 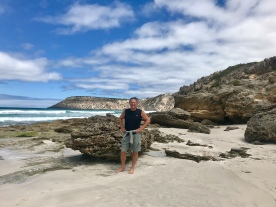 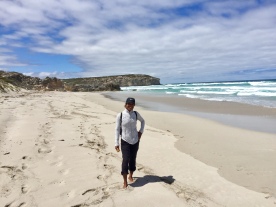