How Barbie got crabs in Kep, Cambodia?  More on that later.

Kampot town has really nothing to it.  Kampot doesn’t look like much on first sight.  It is a small sleepy southern Cambodian town on the river with wide dusty streets and dilapidated buildings left over from the French colony days.  Life feels slow here, unrushed, with hot afternoons meant for lazing in hammocks by the river or swimming in the river when the hot sun chills you to the bone…. “I will walk alone by the Black Muddy River and listen to the ripples as they moan”.

Kampot has a beautiful backdrop of Bokor Mountain across the river where the sun sets behind the mountain.  During colonial days Kampot & Kep were retreats for the French and were called the St.-Tropez of Southeast Asia.  When the Khmer Rouge set up camp here in the 1970s the French split.  Many of the old French buildings that remained have been turned into boutique guesthouses.  Kampot is located almost on the border with Vietnam and the Mekong Delta.

One of the best activities in Kampot was hiring a tuk tuk driver for the day to take us through local villages with wooden stilt houses and thru the incredibly scenic rice paddy filled countryside.  It was fun sharing the road with cows, chickens, pigs and water buffalo.  With our hired 14 yr. old guide in tow, we climbed thru the really cool Phnom Chhnork Cave.  These caves were utilized by the Cambodian people as a hideout from being slaughtered by the Khmer Rouge.  We proceeded onto Kep, a seaside town on Cambodia’s south coast.  With Kep being so close to Kampot, I contemplated where to base ourselves.  I personally found Kampot more atmospheric and has more to do.  I think the day trip we took to Kep was sufficient after eating the freshest seafood you can find.

Kep is all about crabs and its world famous crab market.  Barbie feasted on fresh garlic/butter crabs and that is precisely how she got crabs in Cambodia.  I bet you were waiting for something more juicy regarding how Barbie got crabs but the only thing juicy were the fresh crabs themselves.  Barbie ate 2 full orders and she looked like a true Cambodian Crab Eating Cave Woman.  After devouring the crabs, she boldly proclaimed these fresh crabs that were caught just outside the restaurant window were her best crabs ever.  Moral of the story, getting crabs doesn’t always end badly.  And justifiably, eating seafood right by the source simply cannot be beat. 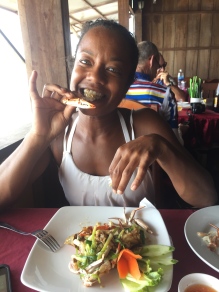 We stayed in the heart of town for a couple of nights to be near the action and restaurants.  We then moved our tack up river into a real spacious riverfront compound with small villas spread around massive open green fields that made it feel like you were living in a Cambodian Village.  It was a real relaxing hideout.  Being on the river, you can go kayaking up the river thru mangroves, standup paddleboard, take a swim in the river or simply watch boats go by, “looking at the white boats coming up the river and it doesn’t look like they are here to deliver the mail”.  The white boat is simply delivering fresh young coconuts and some crabs from Kep.

Insert Inside our Dinner Menu 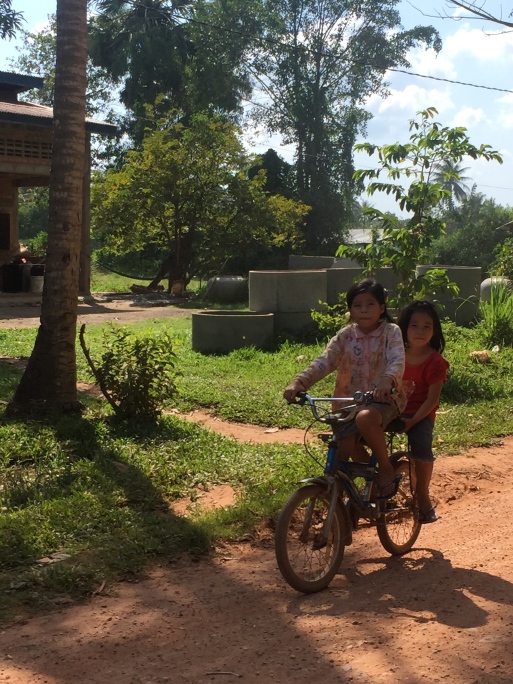 Kampot was a relaxing retreat and now its onto the bright lights and big city of Phnom Penh.

LOOSE STOOLS INDEX – 3  (Dropped a notch Down by the River)

THRU THE BINOCS-
So I see the U.S. State Department has just issued a global terror warning.  Quite frankly, I feel alot safer here in Cambodia than in any movie theater, Walmart parking lot, school, or Taco Bell in the U.S.  So maybe we should cancel all our travel plans and head back to the USA which is home turf for all the crazies with guns?  The only thing that we need to worry about in Cambodia is being scammed by a monk or a monkey.  A monk scammed Barbie out of a buck at Ankor Wat……damn monks simply cannot be trusted!  You also gotta be on lookout for monkeys.  They are sneaky bastards and like to steal shit but I am ok with the monkeys as they don’t romp around toting guns.  I guess its the State Department’s duty to tell us what to worry about and its my duty to let them kiss my fat ass.