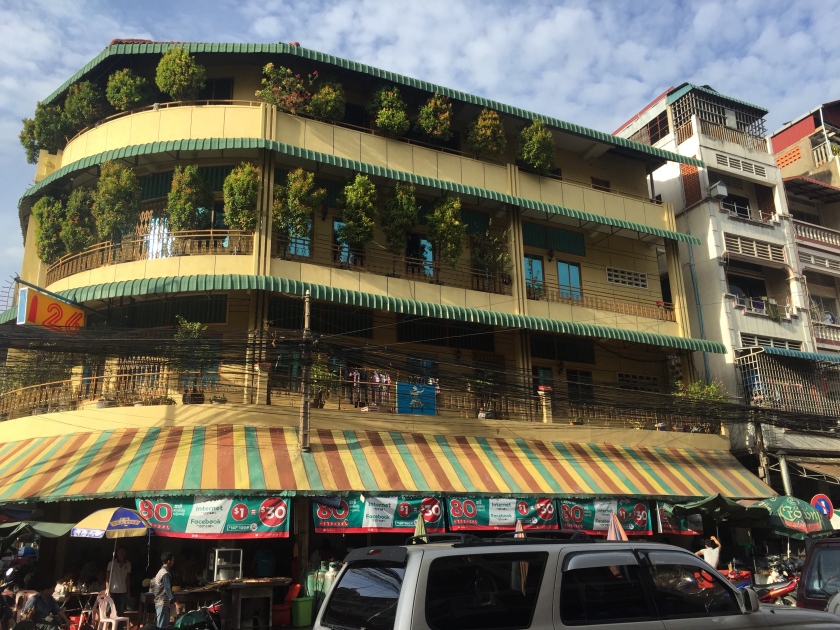 Phnom Penh is having a development boom.  You can visually see the new high rise apartments going up and many infrastructure improvements in the works.  Even with all this development, Phnom Penh does not have the frenetic and cramped feeling of many other Southeast Asian big cities such as Bangkok, Saigon and Hong Kong.

Given the city’s war-torn history, it is quite amazing how the city possesses such a laid-back charm to it.  It is Cambodia’s biggest city, yet it retains a distinct small city feel to it.  Phnom Penh reminds me of the French Quarter in New Orleans with all the French architecture but without the drunks roaming around.  The lush tree lined streets of Phnom Penh also made it particularly appealing and a fun place to get a workout in just by walking around this vibrant city, taking in all of its streetside action and sweating your ass off.  It is definitely a city we would consider hunkering down in for an extended period of time in a rental condo in order to live like a true local.  I just found the compact city to be a real fun and exciting place to live without the overwhelming feeling you would normally experience in a big metropolis.

A must see when in Phnom Penh is a visit to Choeung Ek (The Killing Fields) and Tuol Sleng – S21 (The Torture Prison).  These are 2 major sites where the evidence of the horrors are well preserved.  I think both are places that every traveler in SE Asia should see once.  I have never been to Auschwitz but it must have the same sobering feeling. From the outside, S21 looked like a dingy gray cinder block school it had been once, but once inside the sinister nature of the facility quickly revealed itself.  At the Killing Fields, when walking through the fields pieces of clothes, teeth, and bone poked up through the dirt and grass.  Many of the mass burial pits have not been cordoned off and walking along the dirt paths, no matter how hard you try not to, it is clear that you are walking over remains.  In several places people had collected these bone fragments and teeth under small shelters in a makeshift memorial to those who had died. (see pix below of the killing fields and also video of the pagoda/stupa that housed the skeletal remains of bodies found in one of many mass graves made in honor of those killed)

Witnessing these two places where the acts of the genocide took place was disturbing but a must see to fully understand the magnitude of the mass killings perpetrated by the Khmer Rouge led by the head deranged lunatic named Pol Pot.  I found it incomprehensible how he can be responsible for such a massive slaughter of his own people.  Pol Pot said “better to kill an innocent by mistake, than to keep an enemy alive by mistake.”  I guess his philosophy is equivalent to pressing the “ALL” button.

The entire day was quite overwhelming and difficult to put into words.  I don’t understand how anyone can inflict this much pain and suffering.  Stuff like this really boggles my mind.  And, the fact that it continues to happen around the world even today boggles me even more. When you walk around the streets I strangely observed hardly anyone over 45 years old.  According to the United Nations Population Division, nearly 82% of the population of Cambodia is under the age of 45.  The older folks were all killed by the Khmer Rouge, and a whole lot of them lay beneath my feet the day I visited The Killing Fields. 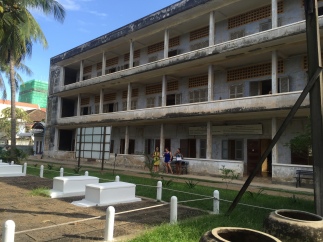 We stayed at an absolutely tremendous boutique hotel called The Pavilion and we were fortunate to even be able to get a reservation due to its popularity.  It was a secluded lush green fortress like property with two pools in the heart of the city.  The main villa on the property was built by the former king’s mother in the 1920’s.  The $55 they charged per night could easily fetch $250 or more at a similar property in the U.S.  I bet you didn’t know Big Doug has a special knack for sourcing out hidden gem guesthouses and I sure hit it out of the park on this one.  I just wanted to take this opportunity to pat myself on the back.  My superior guesthouse booking track record on this trip continues and has been more impressive than the Harlem Globetrotter’s winning streak. 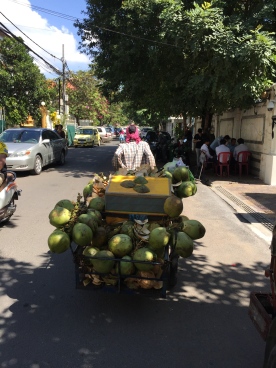 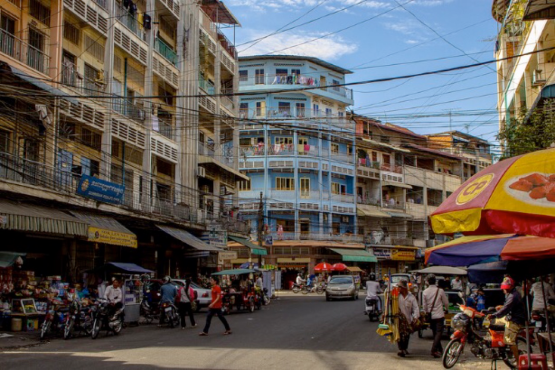 THRU THE BINOCS –
Barbie and I just signed up with an online house sitting company which usually involves looking after a homeowners pet.  She has already received a request from a homeowner in Singapore.  Seems like a good way to experience a foreign country from a different perspective by living in a local neighborhood and caring for an owners dog.  If all goes well, we hope to explore other housesitting jobs.  This is one of the opportunities we are looking to take advantage of during our long term travels as we have a great deal of flexibility and are not under any time constraints.