After 10 months overseas ‘on the move’ during Year 2 of our RTW journey, we arrived back in the United States and it felt as though we arrived into a Third World country.  One of the things I have taken note of during our extensive travels is how the infrastructure, in many other countries is so far ahead of the United States.  The airports, even in the poorest Southeast Asian countries are in a completely different league than the majority of the antiquated, rundown shitty airports in the USA.    I just don’t get how it is possible for America to be left so far behind in the dust.

While waiting for our luggage with a plane load of travelers spanning the globe, Barbie and I both wondered what all these foreigners could possibly be thinking about the USA, the richest country in the world, after arriving into this armpit of an airport.  Honolulu International airport, located in one of the United States largest tourist destinations needs to be condemned and imploded along with many other airports throughout the United States.  So, what was wrong?

Shuttle buses with ripped up seats taking passengers from the airplane to immigration looked and sounded like they were leftover from the 70’s.  Once in the terminal, the ceilings looked as if they were about to fall.  The entire area was filthy and you would figure arriving at 7 AM would allow time for proper overnight cleaning.

Want to take a piss upon arrival after a long flight?  Good Luck.  Bathrooms were disgusting…..toilets overflowing, nowhere to dry your hands with no paper towels in sight and the hand blowers broken.

Immigration was a joke.  The entire area looked like a rundown DMV with over half the immigration booths unmanned and those that were open being staffed with the laziest and most miserable looking human beings.  Once thru immigration, we were greeted with luggage carousels that looked to be over 100 years old with a squealing sound as if  they were on its last legs.  We never waited more than 20 minutes for our luggage in any country.  Here in Honolulu, it took over 1 hr. while sweating our asses off in an area with hardly any air-conditioning.  Every single country offers free wifi in their airports.  No wifi here while waiting 1 hr. for our luggage to appear.

Outside of the airport arrival nonsense, we were happy to arrive at the best place America has to offer………..HAWAII.  The unofficial state footwear of Hawaii is flip fops or barefoot……my kind of place.

We have elected to return to Hawaii for a month to regroup and relax before embarking on Year 3 of our RTW.  We spent a month in Maui with a short stint beginning in Kailua, Oahu.  In the past, we have always opted for the islands of Maui, Kauai and The Big Island.  We avoided Oahu as we found absolutely none of the Hawaiian charm that we are after in Honolulu/Waikiki.  However, we had heard good things about some towns on the East & North coast of Oahu far away from the overbuild sprawl of Honolulu.

KAILUA, OAHU –
We chose to base ourselves in Kailua, a world away with a much more relaxed vibe than supercharged Honolulu.  Kailua is only about a 1/2 hr. from downtown Honolulu but feels a world away as the area is separated by huge and impressive super green mountains.  We strangely keep finding ourselves continuing to travel along the same path as President Obama.  Apparently, we have very similar taste in travel destinations.  We were in French Polynesia with Obama while he was hanging out writing his book following his presidency.  We ate the same Bun Cha joint in Hanoi that he visited during his presidential trip to Vietnam.  Now we are in Kailua, in his home state and the town he had taken his family to every X-Mas vacation during his presidency.   We got our shaved ice fix at Island Snow, Obama’s favorite shaved ice shop in Kailua.  We even drove by Obama’s rental house.  I kinda doubt we will ever cross paths with President Trump on our travels as we have no immediate plans to visit Hell on Earth.  Kailua’s beach has been voted one of the best in the world as well as the beach in Lanikai, the town just east of Kailua.  Being the discriminating beach bum that I am, I can vouch that both beaches are sweet to hang out on.  Strangely, the ocean had a color of water unlike any of the other Hawaiian Islands and it was spectacular.  Oahu had a Aqua Green water, Maui and Kauai has blueish water, The Big Island has a light color Blue unlike both Maui and Kauai.  It was not surprising to see the varying ocean colors with the islands in such close proximity because we experienced the same thing during our stay in the French Polynesian Islands.  Besides the many beaches in the area, the other big activity is the Pillbox Hike (Kaiwa Ridge Trail), which can be completed in less than an hour up a real steep rocky cliff.   The reward for the workout is some awesome views at the Pillboxes located on the top. 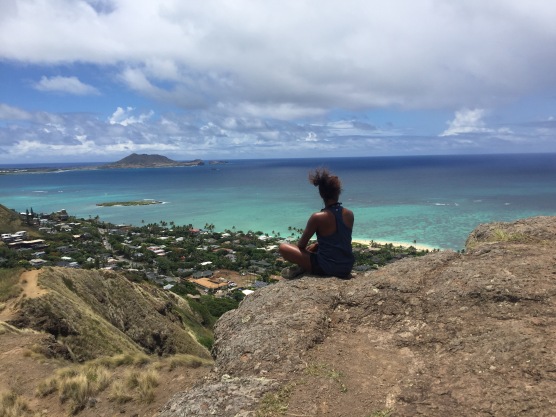 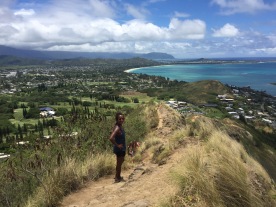 When in Maui, we always elect to stay on the west side on the Kaanapali hillside strategically located with its sweeping ocean views.  Our ‘go to’ condo developments being either the Kaanapali Plantation or the Masters condo developments.  We prefer Kaanapali over the south side towns of Kihei and Wailea as it has a more wide open feeling with the ocean running parallel to the main road with little buildings on the Makai side.  The west side of Maui offers a choice of about 10 different incredible beaches all offering a different beach vibe.  Our favs being Slaugherhouse, D.T. Flemings, Kaanapali, Napili and Kapalua. 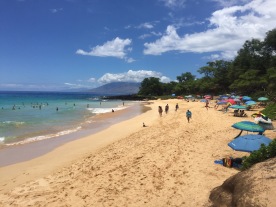 THRU THE BINOCS –
I cannot write a blog post and not talk about the food in Hawaii.  After coming back to our condo exhausted from the strenuous daily beach activity, the last thing you want to do is head out for an overpriced dinner.  Therefore, Barbie, being a master chef, cooked all of our dinners at home in our Kaanapali condo.  Barbie cooked, we ate, we passed out and then awoke for another day of beach activity.  We did venture out for some lunches and the two (2) big food items in Hawaii is Poke and the infamous Hawaiian plate lunch.  There is also nasty ass Spam which is very popular.  Why?  I have no clue.

Poke (POH-kay) –
Raw cubes of sushi-grade fish doctored with various seasonings and sauces and there can be up to 10 different versions of poke to choose from.  Some prepared with shoyu, green onion, spicy mayonnaise, chopped garlic and furikake (a dry mixture of chopped seaweed).  There is a big competition on who dishes up the best Poke and we hit up just about all of them.

Plate Lunch –
Wherever you go for lunch you will see Hawaiians chowing down on plate lunch at their beachside bbq’s or from quick serve take-out restaurants.  If you have ever wondered why Hawaiians are so large, you can probably point your finger at the plate lunches they can be seen devouring which are an absolute Carb Fest.  The plate lunches include your choice of meats (Terriyaki Chicken, Chicken Katsu, Kalua Pig, Pork Lau Lau, Lomi Salmon, Loco Moco, Poke), 2 huge scoops of sticky rice and a huge scoop of Macaroni Salad.  This plate of goodness is then topped with thick brown gravy.  The Hawaiians wash it all down with their local Hawaiian Sun or Aloha Maid icy cold beverage which is available in many tropical flavors.  Well, at least this tasty drink is made with cane sugar and not high fructose corn syrup.

Our time is up in Maui.  We are rested up and ready to embark on the next leg of our journey which will bring us to Europe where we will be visiting Ireland and the Netherlands for about six (6) weeks and then its off to Asia for an extended visit to Japan.