Bagan is simply unique and one of the most fascinating places I have visited in Asia.  This throwback dusty town has such a relaxed pace to it.  The best way to describe this place is that  you feel as though you are mixed up in a combination of being a citizen from Rock Ridge in Blazing Saddles and a cast member on the old wild west TV show – F Troop.  If you enjoy traveling, getting off the beaten path, are looking for a far out experience……. out of the norm, Bagan will serve you well.

The city has the most historic places that I’ve ever been and the biggest draw to Bagan are the 3,000+ world-renowned Buddhist temples that span across the landscape.  This is a temple town and many claim the Bagan Archaeological Zone as an equal to Cambodia’s Angkor Wat, which was pretty damn impressive.  In my opinion, the surrounding areas where the temples are spread across the city are much more tranquil than those of Angkor Wat.  Mainly, because you have the freedom to explore on your own without running into as many tourists.  I have a feeling once tourism continues to pick up, the quiet serenity of these desert temples will be compromised.  Being the historian that I am, looking back on history, while I drifted around these magnificent detailed temples, I wondered what drove the Burmese to build thousands of them.  Looking forward to the 25th century or later, I proceeded to question what epic structures my own country will leave behind.  We really need to get on the ball in the USA and begin building some good shit to leave behind for future generations other than thousands of McDonalds, Taco Bells, KFC’s and Burger Kings currently dotting the landscape of the USA. 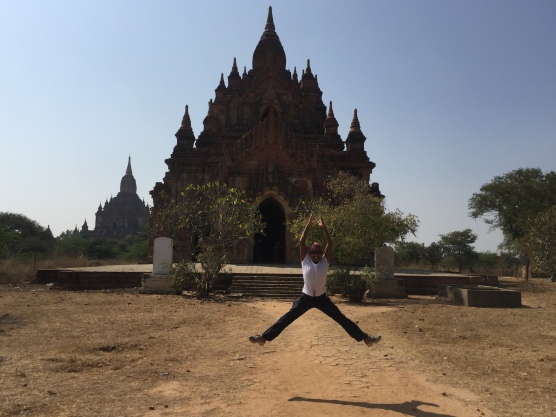 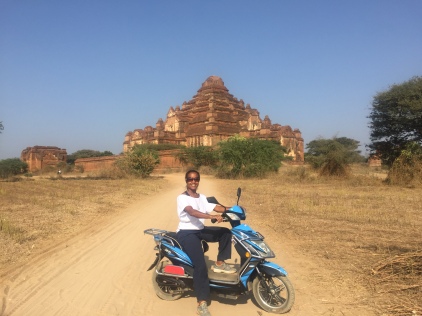 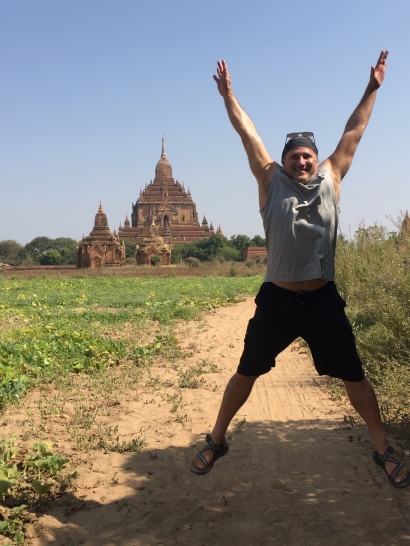 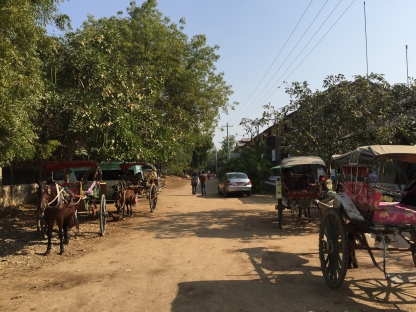 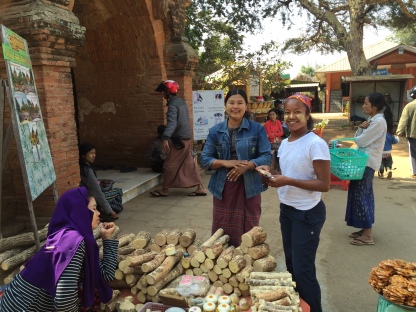 Since the temples are so spread out we opted to rent electric scooters to navigate around. This way, we did not have to sweat our butts off on conventional peddle bicycles.  It was so much fun and incredibly peaceful to simply wander around at our own pace on our scooters.  And, the best news was ‘Crash Siller’ did not smack up her scooter.
(Amendment:  I jumped the gun on Crash Siller.  I originally wrote this blog post the night before we were leaving…..and guess what?  That left just enough time for Crash to do what she does best and took down a Burmese man on his scooter.  Fortunately, Barbie came out completely unscathed and did not even fall off her scooter.  The Burmese guy tumbled to the ground.  After placing 20,000 Kyat  ($14) into his pocket, (which he refused to take, but succumbed to Barbie’s insistence), he was good to go minus a possible slightly bruised rib.  Nonetheless, Crash Siller was frazzled and her time driving anything moving is over for the time being.  State Farm executives were seen dancing with joy that Crash is nowhere near United States soil and not under their umbrella.

Apparently, a real popular way to see and appreciate Bagan’s expansive temple site is by taking to the air in a hot air balloon to see the amazing temples from the air during sunrise.  However, at a price of US$350 per person in a basket stuffed with 12-16 passengers, we did not pull the trigger on the balloon ride.  Whoever set these prices must have been smoking crack and it was the western package tourists willingly supporting this crack habit.  Instead, we pocketed the $350 pp and earmarked those funds to get a massage everyday for the next consecutive 30 days.  The executive decision came to either a balloon ride or being pampered and rubbed on.  Massages seemed a wee bit safer than potentially plunging to your death in a hot air balloon.  Instead, we climbed the steep stairs to the top of the highest temple and took in the sweeping views from there instead of in a balloon.

One of the things I love about Myanmar is that the woman all still wear their traditional clothing.  No succumbing to western fashion which has taken over many other SE Asian countries.  The woman just looked so pure and natural and I hope this never changes as Myanmar continues to open up to the outside world.

We simply loved the super slow pace of this non-developed little city of Bagan.  The thousands of temples spread across the area were a pretty unreal sight.  Cruising around local villages on the hot dusty roads, stopping along the way at fresh coconut and fruit shake stands on our scooters was so much fun.  Just another example of the simple things in life yielding the most joy.

THRU THE BINOCS –
Remember the distinct smell of mothballs at your grandparents house?  I really have not smelled that smell in the last 40 years.   I boarded my Air Asia flight to Myanmar which was filled with Burmese passengers, I wondered why the plane smelled like mothballs. Upon checking into one of my guest houses, the scent emanating from the room was that of mothballs.  I smelled mothballs on a few other occasions including the smell of mothballs on their money!  Who the heck still uses mothballs nowadays and why?  Is it possible mothballs are the new hip scent and the Burmese are on the cutting edge?  I will try to get to the bottom of this odd use of mothballs and will report back if anything comes to light.