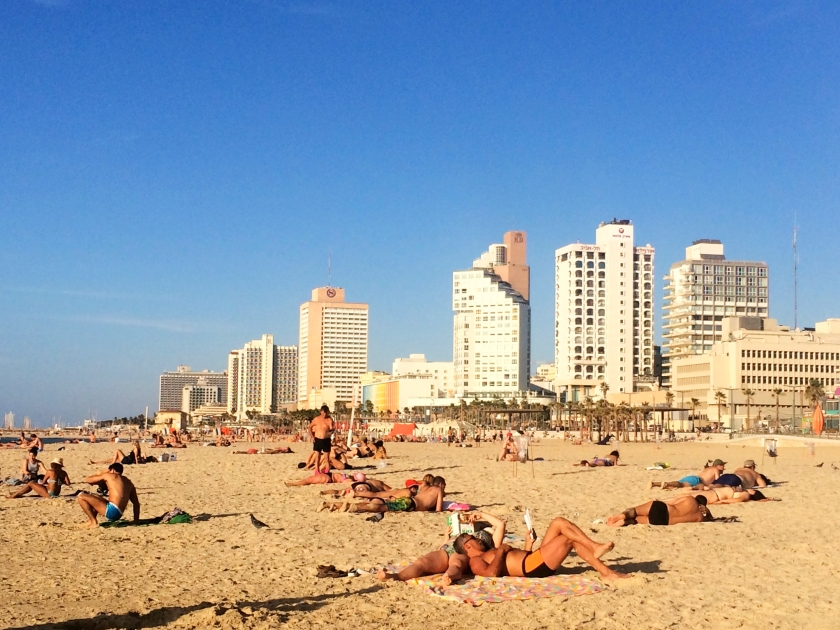 We arrived at the airport in Lisbon for our departure to Tel Aviv with plenty of time to spare.  We had been warned about the local taxi drivers blocking the airport entryways as they were pissed at Uber and wanted them gone from Lisbon.  We have traveled around the world for the past 13 months visiting over 50 cities in 13 countries.  One thing that has been a given and what all of these cities have in common are that taxi drivers are complete dirtbags.  I will go a bit further and say, anybody involved in the transportation business are dirtbags and have perfected the art of scamming.  That goes for Tuk Tuk drivers, Cyclo drivers, Rikshaw drivers, Songthaew drivers, Jeepney drivers, Chicken bus drivers, Ferry drivers and the list goes on.  The absolute last thing you want to deal with after a long international flight is having to haggle with these lowlife thieves trying to rip you off.  There is no haggling and no rip offs with Uber drivers and that’s what is probably scaring the hell out of the taxi drivers.  Their gig is up and I couldn’t be happier.

The check-in process in Lisbon was quite different than what we have grown accustomed to for international flights.  Each traveler checking in was greeted by their own personal airline representative for a series of very detailed questions.  The stern Israeli female agent who was assigned to Barbie and I rang off a string of questions, “Why are you going to Israel?”,  “Do you know anyone in Israel?”, “Where are you going in Israel?”, “Did anybody give you anything to bring into Israel?”, “Did you pack your own bags coming to Israel?”.  The only thing they left private and were not asking me about was the quality of my Loose Stools prior to coming to Israel……which just so happened to be quite solid.  We apparently answered all the questions correct.  We did not win a Ford Pinto but we did receive a little sticker on our passport written in Hebrew.  I cannot read Hebrew, but I assume it said something like, us Flashpackers were down and have been given the green light to enter Israel to gorge on Hummus and Shawarma.

We arrived early morning on the eve of Yum Kippur.  It was quite a unique experience to celebrate this holiday in Israel.  Hours prior to sundown, the outdoor Carmel Market was absolutely buzzing.  I assumed locals were either stocking up on food for the end of the Yum Kippur fast or had plans to cheat on the fast.  The big activity I had read about and planned for a week in advance of our arrival was to rent bicycles to ride around Tel Aviv during the eve and day of Yum Kippur.  You would think riding bikes were a big NO, NO but surprisingly that was not the case at all.  There is absolutely no vehicle traffic on the streets, whatsoever.  No cars, no busses, no nothing on the roads during this holiday, not even a single store was open.  Luckily we booked the bikes in advance as they were sold out all over the city with everybody else seemingly having the same game plan. 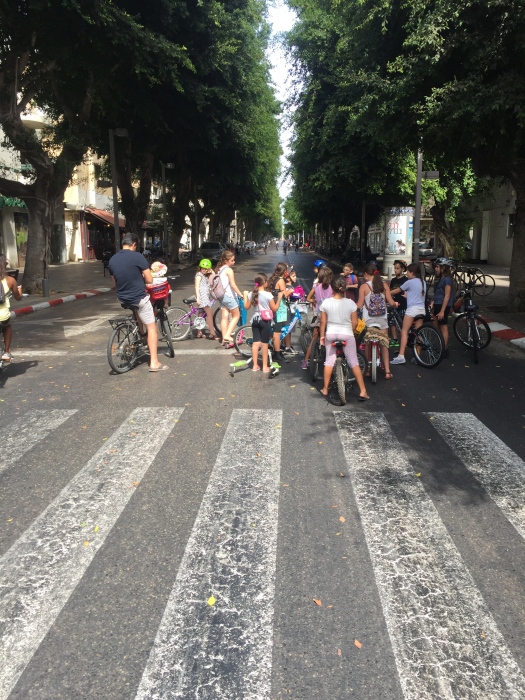 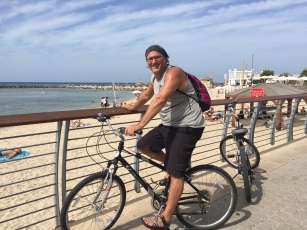 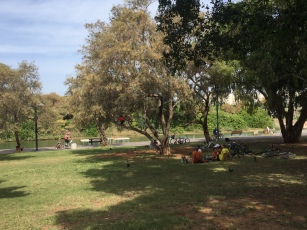 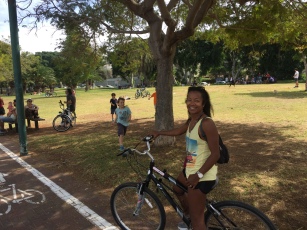 On the eve of Yum Kippur, tons of locals hit the streets with their bicycles, skateboards and roller blades and took the opportunity like us to cruise around the streets of Tel Aviv.  It was a great way to explore the city and learn the layout and a real pleasure not having to deal with moving vehicles.  The kids were having the time of their lives clowning around and rolling thru the streets.  Those not riding bikes during the day, were hanging out on the beaches.  Even the Israeli dogs took to the beach.  The ‘No Dogs’ on the beach rule was suspended for Yum Kippur and the Israeli dogs were all chasing each other on the beach and playfully fighting each other in the sea.  I was told it would have been a $150 fine if their dogs were caught on the beach any other day than Yum Kippur.  So, even the dogs are cut some slack on Yum Kippur day.

I had previously mentioned on this blog that I have seen very few clean urban beaches.  The only ones I had been impressed with were in Sydney and Barcelona.  Well, I can now add the Tel Aviv beaches to this list of great urban beaches.  The beaches here were first rate and were buzzing with activity.  Once the sun went down on Yum Kippur day and the big fast was officially over, the restaurants began to open and the party began in the city and on the beach promenade. 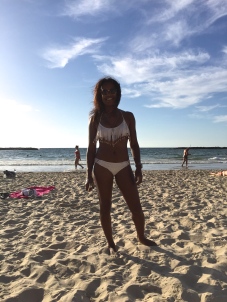 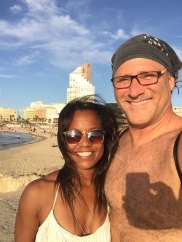 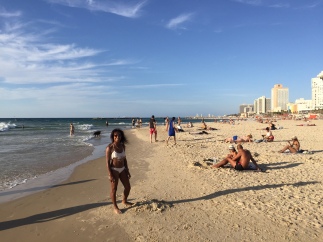 My memories of previous Yum Kippur holidays as a child were the complete opposite from what I had experienced in Tel Aviv.  I can recall all of the Yum Kippur holidays growing up…..attempting to fast to no avail, being bored to death by Rabbi Jungreis’s long ass sermons and mingling with fellow congregation members who mostly had bad breath cause they hadn’t eaten all day.  I just remember the holiday being a real drag back in the Temple Ohr Torah days.  Celebrating Yum Kippur in Tel Aviv was the complete opposite, it was lively and fun.  We had a great time riding our bikes on the vehicle free streets, hanging out at the beaches and the best part was that we did not spend a nickel as there was absolutely nothing to spend money on.  It just reconfirmed my theory that the most fun things in life are free.

The week we spent in Tel Aviv was the perfect amount of time.  We visited all the sights, went to the markets (Carmel, Levinsky, Sarona, Hatashana, Jaffa).  Most importantly, we ate the best hummus of our lifetime.  It was a close call but the undisputed crown champion winner of the most kick-ass hummus, went to Abu Hassan in Old Jaffa.  There was no bullshitting and no small talk at this hummus joint.  The locals eating here were all business and on a mission mopping up their delicious hummus with their fresh pita bread.  I especially appreciated the screaming waiters and the manner it which the hummus was served, I mean thrown at us.  Just a down and dirty hummus feast.  When they run out of hummus, usually by 3 PM, it was game over and the joint closes down. (check out the video below)

The Tel Aviv lifestyle is definitely spectacular.  It is vibrant, lively, somewhat modern and most importantly, positioned on a beautiful sea.  I think everyone should come and experience it.  What makes Tel Aviv such an easy going and comfortable place is the strong sense of harmony among the people.  They seem to have the ‘we are all in it together’ attitude and appear to sincerely look out for each other.  I am guessing, but maybe this is a result of the core values instilled in them by their mandatory army training?  The harmony I am referring to is very similar to what I observed in many Southeast Asian countries.  By spending all this time in other countries, I am beginning to see a pattern outside of the United States.  For some reason, people outside of America seem to have a more relaxed attitude towards life.  The whole idea of ‘wanting it all’ is seemingly not as important.  I am not saying it’s wrong to have the desire to have nice things.  But, I am seeing in other countries you really do not need such a lavish lifestyle to be content.

As for the Tel Aviv negatives.  The city is very old, and many of the buildings are not aesthetically pretty at all.  Even after seeing the preserved buildings in the upscale Rothschild Blvd area which is one of the most expensive streets in Tel Aviv, I still was unimpressed.  Many of the buildings spread throughout the city look like big cement blocks and I was shocked to see graffiti on many of these cement buildings.  I could not believe this is tolerated in a land with such stringent rules.  If you took away the huge stretch of beautiful beach, you would get the feel you had just arrived in any of the big middle eastern cities.  I did see many big modern high rises under construction, especially along the beach promenade.  These new buildings are slowly giving Tel Aviv a more updated look.  The other downside of life in Tel Aviv is the cost of living.  Everything is expensive, so bring lots of shekels as every Israeli are doing their best to get their hands on your shekels.

THRU THE BINOCS –
One thing I have noticed in the European cities we have visited and which also applies to Tel Aviv…..people tend to do what they want to do.  Store and restaurant owners sure get away with a lot of shit.  You really have to be a mind reader to get a handle on Israeli operating hours.  In the United States, It’s called opening and closing hours and they are clearly posted on the window.  Here is the way it seems to work in Tel Aviv.  The shop owners awake in the morning and ask themselves two (2) questions.  Should I open today?  Or, do I simply prefer to just sit on my ass instead?  In Israel, at least they have the built in religious holiday excuse on whether they should open.  You have been warned, coming to Israel in October, which is the big Jewish holiday month, you are in for a real crapshoot if you want to get your lips on some tasty hummus.  It goes something like this, Yum Kippur?, lets close.  Sabbath, lets close. Sukkot, lets close.  Simchat Torah, not a big one, but lets be consistent and just close.