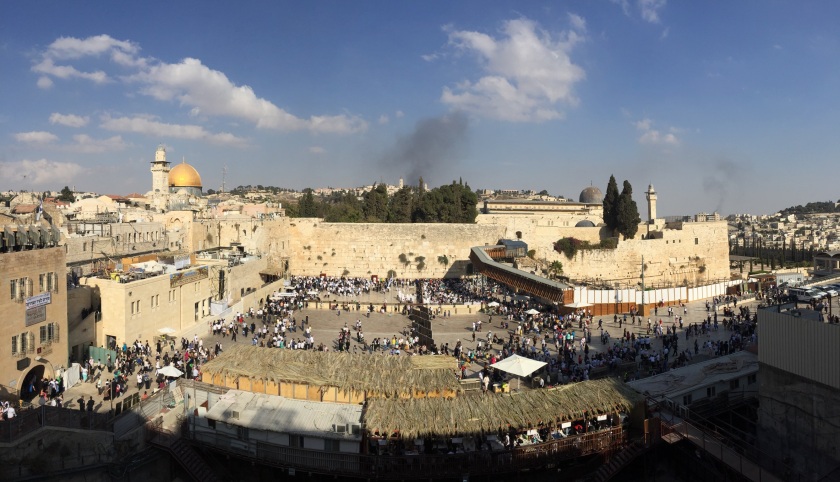 On our first full day in Jerusalem, we headed directly to the Jaffa Gate to meet up with our walking tour of the Old City.  After the tour, we proceeded to walk down the main drags of Yafo Street and Ben Yehuda towards our Airbnb near the Mahane Yehuda Market.  Because it was the national Jewish holiday of Sukkot, Emma’s and Abba’s were out in force with their children in tow.  Many dressed in their formal religious clothing celebrating the holiday: eating, shopping, dancing in the streets and just plain hanging out.  The atmosphere in the entire area was absolutely buzzing with holiday spirit.  I had inadvertently booked our trip to Israel during Yum Kippur and Sukkot.  It actually turned out to be a great decision as it allowed us to experience the holidays in a completely different way than back at home.

The highlight in the Old City was the Western Wall which I last visited for my Bar-Mitzvah.  I did put a note in the wall in 1977 asking the ole mighty g-d for a moped.  (hey, mopeds were the hippest thing around back in 77’).  My wish never came true so I wanted to see, what’s up?… so, I went looking for the note but to no avail.  As an adult and with a very different perspective on life, I took the opportunity on this visit to put a new note into the wall with a more meaningful request.  The timing of our visit to Jerusalem allowed us to visit the Western Wall for the Friday evening Shabbat services and that was truly amazing.  I would highly recommend a visit to the wall during this time as the atmosphere was electric and a sight to be seen. 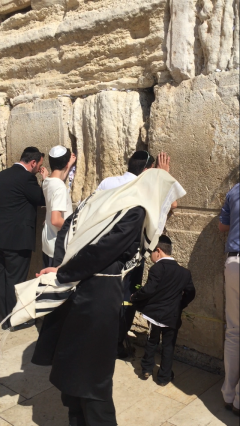 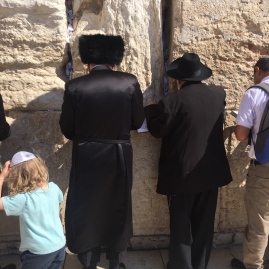 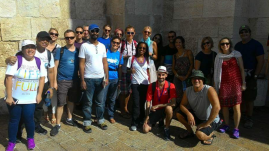 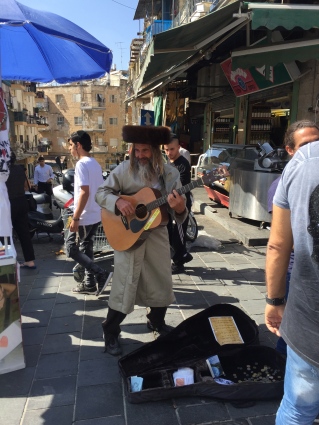 One of the things I love most about traveling is the wacky, far out experiences that we encounter on a daily basis.  We had just arrived in Jerusalem and Barbie and I set off for a leisurely stroll around the narrow alleyways of the unique Nachlaot neighborhood adjacent to the very colorful Mahane Yehuda Market.  Barbie actually preferred wandering around the action of the market.  However, I convinced her to forgo the market area and instead visit a local neighborhood, where the true treasures were awaiting to be uncovered.  Well, I was certainly not prepared for our impending treasure.  As we were walking, a pretty Israeli woman in her mid to late 30’s with her baby by her side, caught eye contact with us and invited us into her house for a Sukkot blessing/shake of the lulav in her homemade Sukkah. Her husband, who appeared to be orthodox, led a blessing for us with a citron (a type of a lemon grown in Israel) and lulav.  We both did the shake and after the blessing, they sat Barbie and I down inside the Sukkah, gave us drinks and homemade pastries that tasted a bit like cardboard.  We proceeded to talk about stuff that was a bit over Big Doug’s head.  I still listened intently all while feeling my brain was about to explode from the information overload.  I could tell Barbette was really enjoying the conversation.  Taking in all of the in depth Orthodox philosophical explanation on the meaning of the enlightenment of the human soul and body.  It was really deep stuff and despite trying, I can honestly say my brain waves malfunctioned and basically sat there in a state of bewilderment.  Thankfully, I had my great smiling, attentive, personable Barbie with me to carry the conversation and help us (actually just me) thru this experience.  Thank you Barbie, I owe you big time for carrying me during this challenging social moment.  That being said, the religious experience of partaking in the Sukkot holiday in a local’s house was pretty damn cool and one I will surely never forget. 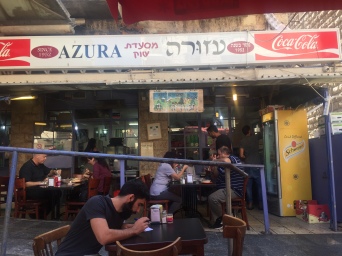 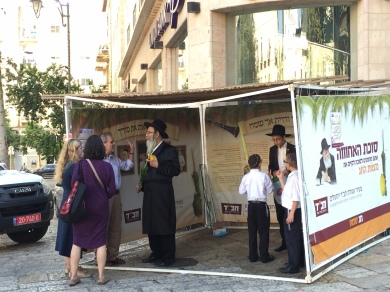 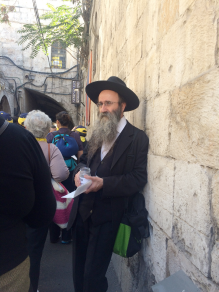 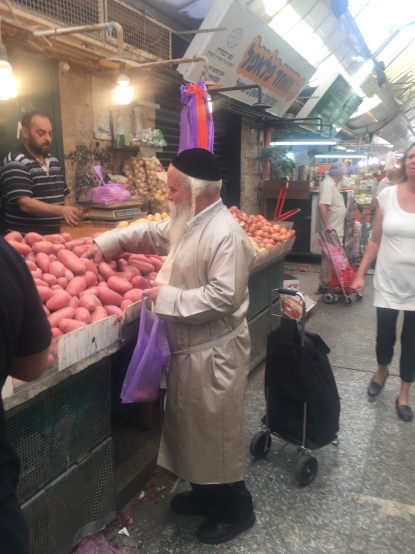 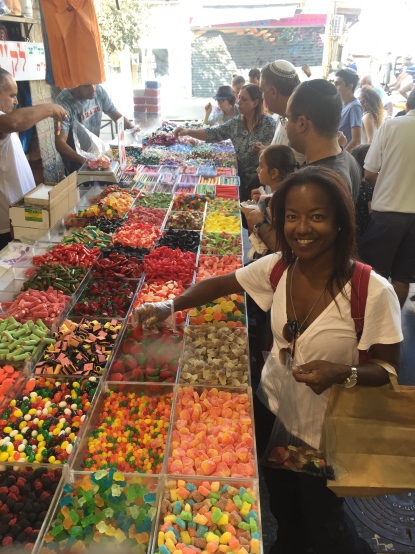 The Yad Vashem Museum which is Israel’s memorial to the victims of the Holocaust sits on Mount Herzl.  It is an absolute must see.  I had been to Yad Vashem about 25 years ago and I was pleasantly surprised to see the memorial and the presentations inside were all brand new.  They really did an amazing job with the rebuild.  Too bad they did not do as good job with the rebuild/redesign of the Anne Frank Museum in Amsterdam which I had also visited 25 years ago. I felt they ruined the experience of the original.  We both learned so much at Yad Vashem and the manner in which they presented the timeline of the Holocaust was so captivating….even for a simpleton like myself.  We smartly opted for the audio tour.  It was so engaging that when I realized after over 2 hrs. we were less than 1/3 thru the exhibits/audio tour, I knew we had to pick up the pace or we would have been in the museum for for well over 8 hrs.  And, going 8 hours without downing a Shawarma is just not good for the soul.

In my opinion, the optimal way to absorb the most information that Yad Vashem has on tap, would be to see 1/2 of the exhibit on one day.  Go home to digest all the information (along with your Shawarma) that evening and return to Yad Vashem the next day to see the second 1/2. Surprisingly, The memorial is free of charge to enter.  This is quite unusual as we have grown accustomed as travelers having to ante up at all main local sites.  This is one place nobody was after your shekels.

Strangely, I found the pace much faster in Jerusalem than the laid back nature of Tel Aviv.  That was the complete opposite than what I was expecting.  Maybe because we arrived during the very festive Sukkot holiday?  We were in one of probably the holiest places in the world and I took notice of something a little odd that left me a bit uneasy.  Not only did I observe the people in Tel Aviv to be much friendlier and relaxed than those in Jerusalem, the sour ass attitude in Jerusalem took time to accept and get adjusted to.  I found many retail store, restaurant and hotel employees to have perfected the art of apathy and rudeness.  If you have ever been to Durgin Park at Faneuil Hall then that paints a similar picture.  However, at Durgin Park it is really part of the show.  In many places in Jerusalem, its the real deal across the board.  It was strange to witness not just the bad attitudes but also the pushiness.  I really have never seen this before in any of the countries we had visited.  In Jerusalem, I also took notice that many locals seemed to have no understanding of personal space and the thinking must be, whoever pushes the hardest wins.

The Israeli’s specialize in war so they know all the psychological mind game tricks to win but they met their match with me.  I weigh in at 200+ lbs, and when the pushing starts on trains, in markets or in crowded falafel joints, Big Doug simply flexed and turned my body into a brick and it was game over for these hombres.  All of this pushy aggressiveness really did not bother me that much because I found the locals in Jerusalem were not just rude to us but they are actually rude to each other. I am still trying to figure out the reason why the locals feel compelled to act like this, as this was certainly not like the harmony amongst the people we experienced in Tel Aviv.

You can easily “get lost” in Jerusalem’s maze of alleys if you want to. It is really one of the most impressive cities I have visited.  Where else on earth can you experience so many different peoples/religions co-existing in such a small place?  We would be wandering around the old city and you would have Hasidic Jews, Muslims, Christian Clergyman, Orthodox Jews and a mish mosh of other religions passing each other peacefully thru the stone alleyways heading to their mosques, synagogues and OTB’s.

Jerusalem’s Old City isn’t large.  It is very small – approximately one square kilometer.  But, it is packed with interest.  Whatever your religion, you will find plenty to see in Jerusalem.  Sure some parts are crowded with tourists, but after all, we are tourists.  Yes, it is possible to shuffle from site to site with tourists.  However, the negatives associated with the shuffling from site to site just doesn’t feel like that.  It’s because, Jerusalem is alive and happening.  It’s not a boring ruin city, the ‘tourists’ are people that actually want to be there to pray.  You’ll see crying people, intense people and screaming people.  The new city is almost as interesting as the old city.  You’ll find a buzzing city with cool looking old streets and plenty of cafes and bars with locals hanging out.  Basically, we just walked around, got lost and loved it.

Many have asked if Israel is a safe place to visit.  Of course nobody can guarantee what might happen tomorrow, next week or at any time in the future (anywhere in the world), but generally speaking, Israel is safe.  We walked the streets night and day in both Tel Aviv and Jerusalem, down remote alleyways and never once felt the least bit threatened.  Military and all sorts of security personnel are everywhere to help secure everyone’s safety.  The Specialty Forces that provided protection specifically to those attending the Friday nite Shabbat services at the Wailing Wall was really a site to be seen.  They sure looked intimidating with machine guns in hand and with their general body language basically saying, “Don’t even freaking try it.”  Yes, Israel is safe and I would go further and say it’s probably a lot safer than wherever you are in the USA. 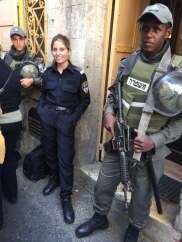 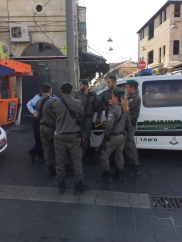 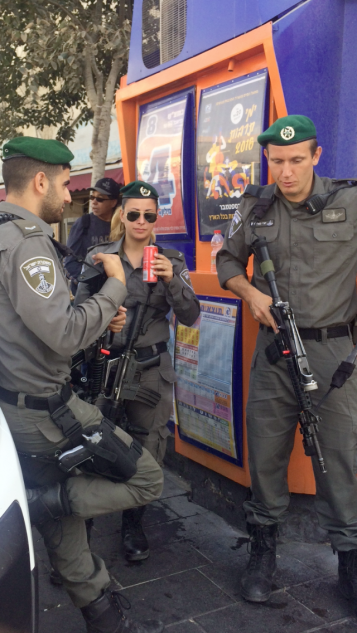 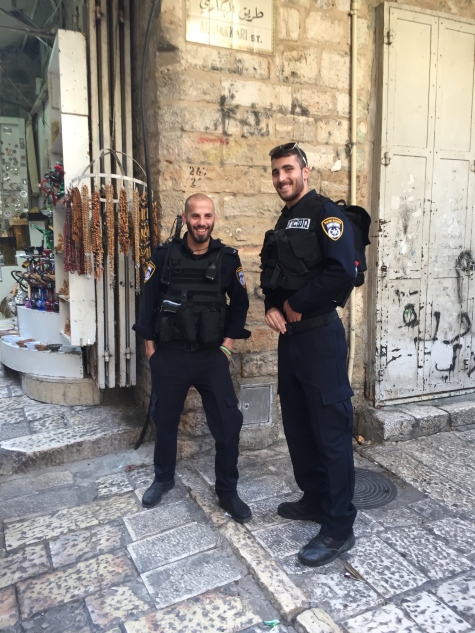 THRU THE BINOCS –
I have never really come into close contact with Hasidic Jews like I did in Jerusalem.  Trying to figure them out was a real puzzle.  I do not know if this is correct but I had been told these religious Hasidic Jews actually do not work.  Somehow, someway, somebody is paying their way.  Maybe they are government assisted?  They all have these elaborate outfits on that do not look cheap to buy.  They wear these long shiny black coats and huge fur hats made of fox or some other expensive furry wild animal. (check out pix of these hats below).  These hats, called Shtreimel’s are custom made and not cheap.  They actually cost in the ballpark of 3 grand each.  Now, that is alot of freaking shekels for someone that does not work, yet they all have their very own Shtreimel’s.  They look like the kind of hats a highly paid professional football or basketball player would love to wear in the middle of a cold winter going for the ‘pimped out’ look. 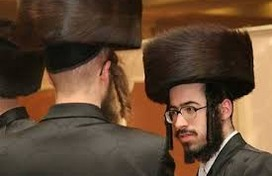 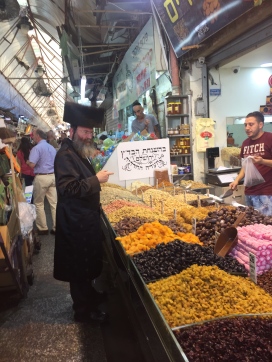