We left the beaches of Surfers Paradise and headed 3 hours north in our very eco-friendly hybrid rental car.  Good thing we opted to upgrade to this hybrid vehicle as gas prices in Australia are very high.  This hybrid was the most fuel efficient car I have ever driven.  We saved a lot of moolah on gas and applied those savings to some extra servings of meat pies.  We left the sunny Gold Coast and arrival into the Sunshine Coast brought us to even warmer, more tropical weather.  Our first stop was Peregian Beach a gorgeous, upscale beach community just outside of Noosa.  All of the beaches in the entire surrounding Noosa area were simply fabulous.  What made the beaches so special was that many are adjacent to Noosa National Park and the forest gave the beaches a very wild feel to them.  Australia is the only country we have visited to date, that rival the best Hawaiian beaches.  Australians, just like Hawaiians respect their beaches as you can visually see how spotlessly clean they are.  In addition to Byron Bay, the Noosa Heads/Peregian area on the Sunshine Coast are definitely areas we would enjoy living in on a longer term basis.  Just a real great quality of life to be had here. 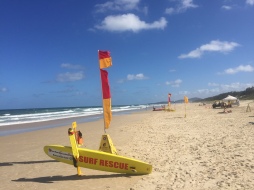 We used Hervey Bay as the departure point for Fraser Island.  This was my 4th trip to Fraser Island in the lifetime of Big Doug and that should illustrate the love and infatuation I have for this island.  It is Barbies 2nd visit.  Unfortunately, on our last visit together about 10 years ago the weather gods took control and rained on our parade.  It was unique exploring the island in the rain as the colors in the rainforest really became pronounced.  However, nothing beats the slice of heaven that Fraser Island is when it’s sunny.

For the best experience, most people opt to camp out in tents when visiting Fraser Island.  The camaraderie among the campers is awesome with backpackers partying and eating together in campsites spread throughout the island.  After enduring the unfortunate rain on our previous visit where our tents supplied to us sucked and sprung leaks, Barbie put her foot down.  When I proposed to camp out again, highlighting the awesomeness of this island when its sunny, she looked me square in the eye and said, “No fucking way am I sleeping in another tent”.  I knew immediately Flashpacking Barbie was as serious as a heart attack and I better pick my battles elsewhere.  Hey, I was never a big ‘Trek’ guy at Camp Echo Lake so who was I to preach the merits of camping.  Now, if I had Brosty with me to set up the tent properly, hook up the campfire, light the mosquito coils and cook up some good shit to eat in a big rusty steal pot, that would be a different story.

Consequently, instead of staying at the only real resort lodging on the island for our 3 nights on Fraser Island, we opted to compromise and go ‘Glamping’.  Glamping is the newest trend for pussy campers (can I say pussy?…our president did!).  It is a form of camping involving accommodation and facilities more luxurious than those associated with traditional camping.   When you’re glamping, there’s no tent to pitch, no sleeping bag to unroll and no fire to build.  Whether in a tent, yurt, airstream, igloo, hut, cabin, teepee or treehouse, glamping is a way to experience the great outdoors without getting your ass eaten up by mosquitoes.  I had very low expectations heading into our Beachcamp Eco Resort glamping tent.  I just figured it would beat the shit out of laying on the ground in a sleeping bag.  However, our glamping tent could potentially have been better than any 5 star resort that we have stayed in.  And, I have stayed at plenty of those 5 star bad boys simply because I was once a ‘Player’.

Sleeping in our oceanside glamping tent was one awesome outdoor experience.  The crashing waves on Fraser echoed thru our tent and made for ideal sleeping conditions.  Surprisingly, the bed in our tent potentially could have been the most comfortable bed I have ever slept on.   Couple this, with The Oringer Boys going down as ‘the’ most renowned and admired sleepers on this planet and there you have the recipe for one superior napping session.  During my older years, I was never really able to recapture the same deep naps achieved in the waiters bunk at CEL on a rainy day.  However, I can boldly proclaim I had arguably the nap of the century on one of the rainy afternoons in our glamping tent.  A nap that will not be forgotten and probably never duplicated. 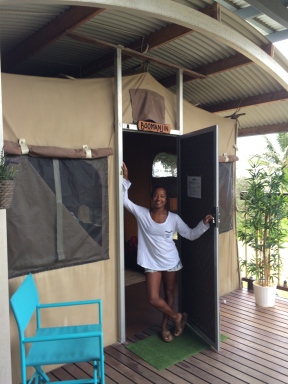 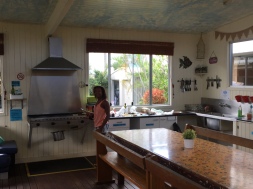 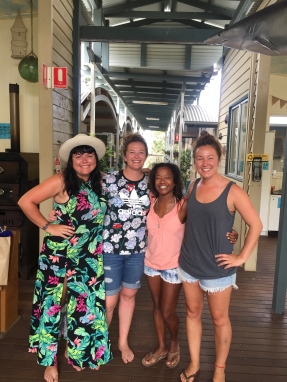 Barbie and her Fraser Island Mates

World Heritage-listed Fraser Island is a tropical holiday destination at the start of the Great Barrier Reef.  It is one big rainforest sand island and is nature in its’ purest form.  The feeling of serenity on Fraser Island is unparalleled.  No cell phones, no internet, no TV, no money to be spent…….a nice change from everyday life.  This is one of the most beautiful spots on earth.  The island is really wild and rugged and has some of the most incredible natural sites.  The mode of transport on the island is strictly heavy duty 4WD vehicles which can be rented in Hervey Bay and taken on the ferry to Fraser Island.

There is a huge range of outdoor adventures to be experienced on this island.  You basically get into your 4WD vehicle and drive on the sand along the ocean (while keeping a watchful eye on the tide), thru sand tracks running thru the rainforest which criss-cross the world’s largest sand island.  Two of the lakes on the island (Lake McKenzie, Lake Wabby) stand out as being ‘out of this world’ unbelievable and are a absolute must-sees in life before you die.  The color of Lake McKenzie is a color blue that I have never seen before in a lake.  So clean, you can actually drink right from the lake. Lake McKenzie is a perched lake and is only filled with rainwater.  The water in the lake is so pure it is unsuitable for many species.  The lake is not fed by streams and does not flow to the ocean – all of which makes it a super refreshing spot for a swim.  To top off the coolness factor, the sand feels like nothing I have felt before.  The sands around the lake are composed of pure, white silica and is magic to the eyes and feet. Fraser was simply epic, I dream of returning many more times.

In all of my travels, one other place other than Lake McKenzie looked like ‘heaven on earth’.  That secret place was Makalawena Beach.  However, you must capture both on a sunny day for the ideal setup.  I can name many other, hidden gem dreamy spots that we have come across on our journey, but these two really stand out as some real special ones.

We leave the Sunshine Coast in Queensland, Australia and now head further north on the east coast to the Great Barrier Reef and deep into the Daintree/Cape Tribulation rainforest. 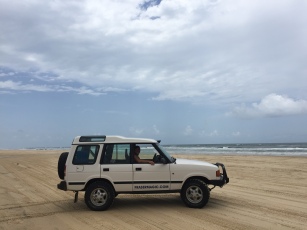 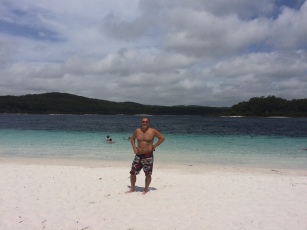 THRU THE BINOCS –
I previously talked about Meat Pies being the ‘go to’ food item in Australia.  Nevertheless, this is always up for debate, just like how some people identify Singapore by their chili crabs and others, by Hainanese Chicken Rice.  In addition to the Meat pies, the Fish N Chips are also arguably a top level Australian signature dish.  Fish n Chips seem like a pretty simple item to prepare but for some odd reason, finding real quality Fish n Chips in America is nearly impossible.  And if you do, you will probably overpay.  The Aussies got the Fish n Chips recipe down.  The fish is freshly caught, no frozen stuff here and tastes so damn good.  The only beef I have is that the majority of Fish n Chip places do not provide tarter sauce and ketchup with your order.  You have to buy a small plastic container separately and they charge anywhere from 50 cents to $1.50 extra.  I hate to be nickel and dimed but you have to bite the bullet, learn to accept this practice and just roll with it, just like the locals do.

The tarter sauce is always on the money so I have no issue there, but they usually have real shit ketchup (definitely not Heinz) on offer.  Since Barbie and I eat fish n chips regularly, (while alternating between meat pies), we took matters into our own hands and purchased a small bottle of Heinz ketchup that we carry in her backpack.  Note, this is not a case of being cheap.  We simply demand quality ketchup with our chips.  I had to get used to Aussies calling french fries ‘chips’, but hey, nothing to difficult to get used to.  Chips or fries, I love them all.

Outside of meat pies and fish and chips, the other top item in Australia is Tim Tams.  These Aussie cookies come in various flavors, are super addicting and readily available in all supermarkets.  You may be able to get a hold of some Tim Tams from an international market or specialty food store in America.  If so, do so.  You can thank me later. 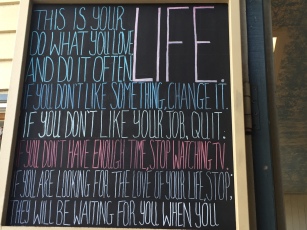 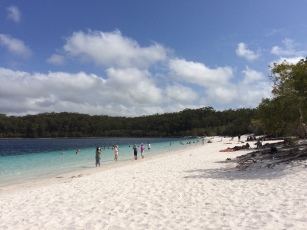 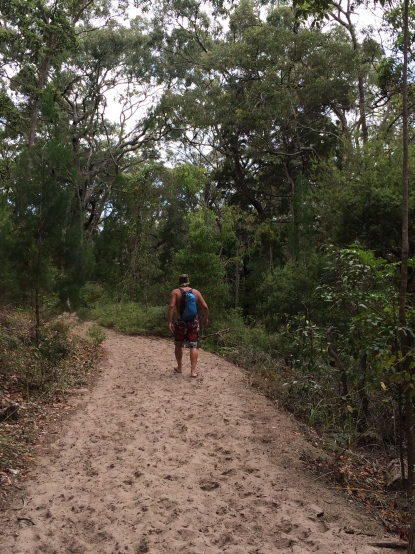