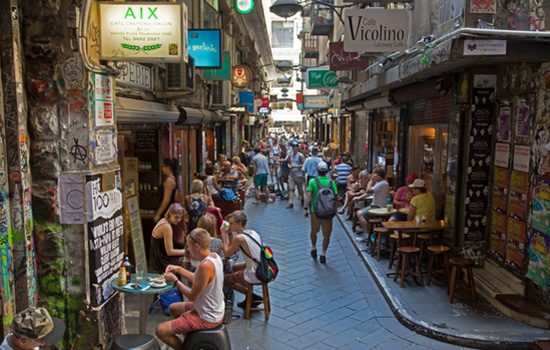 We were warned by some locals we met during our travels in Queensland that the weather in Melbourne is quite volatile.  The saying goes, “Melbourne experiences 4 seasons in one single day”, and I can confirm, that ain’t no joke.  After departing the steamy 95 degree temperatures in the tropical north of Queensland, we arrived in Melbourne to windy and cold, fall-like 55 degree temperatures despite the fact it was summer in Melbourne.  Later that afternoon, the sun came out and it felt like 75 degrees and within hours of just one single day temperatures fluctuated between 55 -75 degrees.  It was quite bizarre.  Two days later the sun and heat rolled in with 85 degree temperatures and then it was back to fall weather 3 days later.  Other than adapting to the fluctuating weather, we had to adapt to city life in Melbourne as we had grown accustomed to the simple, laid back beach/rainforest lifestyle in Queensland.

Since Barbie and I really dislike congested big city living, being surrounded by big buildings and crowds of people, we opted to base ourselves away from the downtown CBD (Central Business District).  We narrowed down our lodging choice to the low key and spacious feeling of the Carlton/Fitzroy area just north of the CBD but easily accessible to the busy downtown area via trams which run all day.  The neighborhood is filled with hipsters, colorful street art on building walls and unique old style victorian row houses.  The other suburb that was on the table to base ourselves was the bohemian area of St. Kilda….home to artists, musicians, hippies, alternative lifestyle peeps and a beach which is a big zippo.  Strangely, unlike the world renowned urban beaches in Sydney (Manly, Bondi, Bronte, Balmoral, Coogee), Melbourne’s beaches are not even in the same ballpark.  However, I had been told by some locals if you insist on getting in some beach time, its best to head a bit south out of the city.  After spending our time at some of Australia’s best beaches in Queensland for the past month, we passed on the inferior Melbourne beaches and simply took in the city life.

Melbourne has become famous for it’s café culture scene.  It is home of arguably the world’s best coffee.  We are talking serious coffee houses with serious baristas and knowledgeable coffee drinkers.  Locals flock to these coffee houses everyday to socialize and relax as these cafes act sort of like community hubs.  Unlike in other parts of the world, Starbucks is a non player here in Melbourne and most other parts of Australia.  You will rarely see a local getting their java fix from a Starbucks.  As many of the independent cafes Starbucks competes with are independently owned, Australians seemed to take a moral stance against the American mega-chain’s invasion.  It also didn’t help Starbucks’ case that most Australians can see through their sugar-laden excuse for coffee.

The city streets are abuzz with not just endless coffee houses but also quirky cafes and restaurants.  Brunswick Street in the Fitzroy area was one of the most vibrant streets filled with coffee shops, eclectic shops and live music venues.  Fitzroy, also has tons of cafes serving up the most unique brunches I have ever tasted.  If you are a breakfast person, you will be in breaky heaven as some of the dishes served up at these brunch joints were works of art and beyond what any celebrity chefs could drum up.  The big challenge was choosing which of the Top 20 to eat at so be prepared to do your homework on your next visit to Melbourne.  BTW, I must mention that Tums are unavailable in Australia.  Now, what’s up with that?

Both, Brunswick and Smith streets were real fun to wander around, check out the street art, chow down and just soak in all the funky local atmosphere.  Some other homey streets in the Carlton/Fitzroy area to wander around include: Rathdowne Street, and the tree lined Lygon Street (aka Little Italy) with all its family owned Italian eateries.

We finally made it to our first racetrack on this leg of our journey here in Melbourne.  We spent the day at Flemington Racetrack, home of the infamous Melbourne Cup.  Definitely one of the nicest tracks I have been to.  That is a real statement coming from a supreme lifelong degenerate who has ticked off visits to racetracks spanning the world.  I would have to rate Flemington on par with some of my other favorite tracks.  We loved the lush grassy trackside park area that you can cool out on while watching the races.  We actually laid out on the grass even without a blanket.  Just try that in Saratoga’s dusty dirt backyard area.  If you are lucky enough to be here the first Tuesday of November for the Melbourne Cup, then you are in for a real horseracing experience as the entire country, not just Melbourne, shuts down for this mega event. 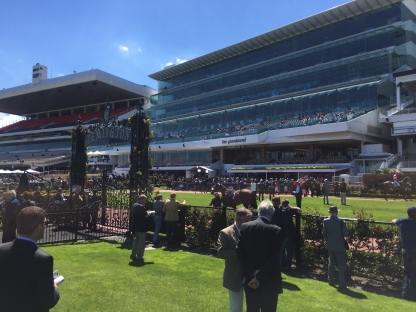 Some other good activities when in Melbourne:
Bike ride along the length of the Yarra River.Visit St. Kilda on a weekend.
Visit the Markets – Queen Victoria Mkt., Prahram Mkt., South Melbourne Mkt.
Visit the all the CBD laneways packed with cool cafes: Degraves St., Hardware Lane…etc.
Cool out in one of the many parks: Albert Park, Edinburgh Gardens, Carlton Gardens, Royal Botanic Gardens.

Our time is up in the big city of Melbourne.  It’s now back to our true comfort zone.  We are ready again to experience more Aussie nature and what looks like an outdoor playground in Tasmania.

THRU THE BINOCS –
Australians love their horseracing.  What’s really cool is they have old style TAB’s in every single town and city throughout the country so getting your action down is never an issue.  A man needs to have one piece of action down everyday.  Otherwise, you could be walking around a lucky man and never know it.  These TAB’s are getting a makeover and the Aussie racing gods are converting the 1200+ old school TAB outlets into more modern, high tech UBET betting outlets.  This facelift is sure to appeal to the new internet generation.  Too bad American racetracks and OTB (if they even exist nowadays) have their heads up their asses and have failed to adapt to the 21st century.  So what is TAB/UBET?   It is Australia’s version of New York’s OTB (Off Track Betting) without the risk of getting lung cancer from an inordinate amount of smoke inhalation.  The customers attending these TAB’S actually look normal unlike the cretins you would spot in a typical OTB.  Sometimes TAB’s are standalone locations but in many cases the older TAB’s are small outlets inside of pubs/bars making it more of a social activity.  Local degenerates come in for a pint of beer and can very conveniently bet on the ponies all while shooting the shit with each other. 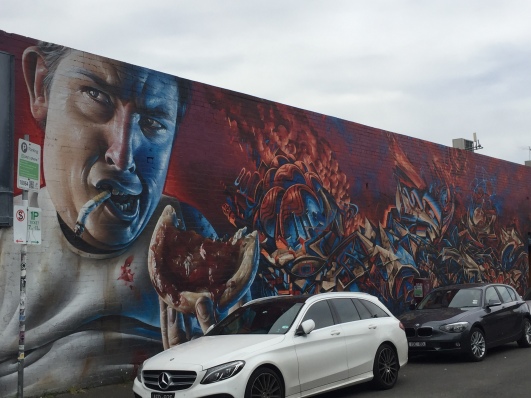 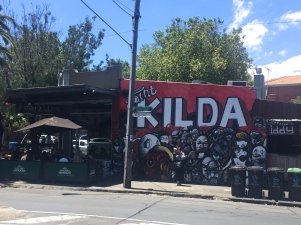