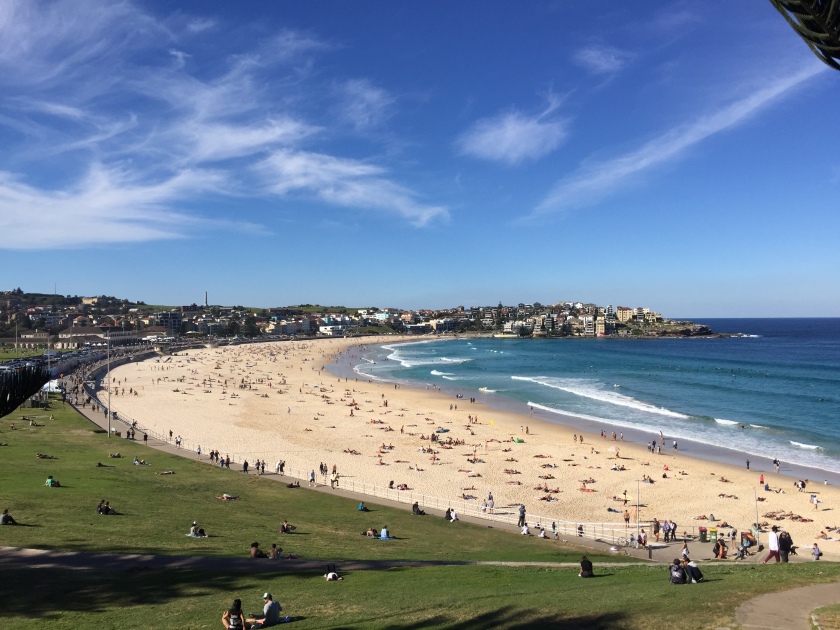 Following our relaxed tropical beach retreat in the Society Islands of French Polynesia, we were refreshed and re-energized.  We have decided to head back to the wackiness of Asia to check out a few countries we missed out on during last years 8 month swing thru Southeast Asia.  Our flight ticket on Cathay Pacific that we purchased enroute to Asia, permitted us to make a pit stop in Sydney, Australia for a week.  In Sydney, you will find a hip urban metropolis and fabulous ocean beaches.  This coupled with a final opportunity to scoff down some more meat pies and fish n chips.  We simply could not pass up that superfecta.

Sydney Harbour is one of the most picturesque waterways in the world.  Circular Quay and the surrounding waterfront promenade is the hub of activity with the Rocks, Opera House and my favorite city park, The Royal Botanical Gardens all in close proximity to each other.  The Royal Gardens was an oasis in the middle of the city centre with a sprawling green lawn that was a great place to cool out on.  A place where the fast pace of the city life comes to a halt.   Being surrounded by all this serenity, the Gardens were a place to reflect on the good in this world.  And then for some strange reason my mind drifted to how it is humanly possible for another human being, running the country that I was born in, to be such an all around asshole of a person. 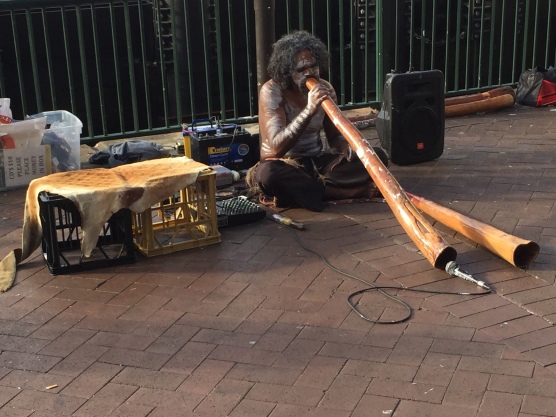 In addition to the sights surrounding Circular Quay, it is also the departure point for all the ferries that will shuttle you thru the Sydney Harbor and onto the smaller towns and their amazing beaches.  Sydney boasts over 200 beaches, each offering their own unique spin.  With at least nine warm months out of the year (October to May) and easy accessibility via ferry or bus from the city, the beaches are a big draw.  The ferry to Manly Beach, a cool little beach town and also one of Sydney’s best beaches, was a great place to spend the day.  However, locals will tell you that Bondi Beach is soy numero uno and blows Manly beach away.  Manly and its quaint relaxed town had the edge in my opinion but Flashpacking Barbie preferred the younger, more vibrant surfer scene at Bondi.  The famed six kilometer Bondi to Coogee coastal walk hugging the coastline is the most talked about walk and a must do.  The walk has amazing views along the cliffs and passes thru five of the finest urban beaches in the world. (Coogee, Clovelly, Bronte, Tamarama and Bondi). 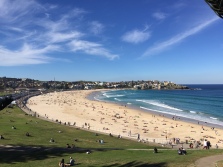 While walking around downtown Sydney, we both wondered at times if we were in Australia or Asia.  Asians are everywhere and every other restaurant downtown seemed to be some variety of Asian Food.  The Asian invasion is quite apparent and very similar to what we witnessed in Auckland, New Zealand.  While Auckland had a younger set of Asians who appeared to be university students, Sydney seemed to have an older working class Asian population.  I did not notice these large swaths of Asians in our time spent in Melbourne.

SYDNEY VS MELBOURNE (Let’s get ready to rumble) –
Both Melbourne and Sydney frequently appear on annual lists touting the world’s most livable cities.  We visited Melbourne, during our most recently completed 3 (three) month stint in Oz, so a visit to Sydney was in order.  All thru our Australian and New Zealand travels, we met people from both cities and discovered there exists an intense rivalry between the two.  It seemed that if you live in either of these cities, it’s virtually the biggest debate second only to who has the tastiest Fish n Chips.

The rivalry was not quite on the scale of The Crips vs The Bloods but the meat pie eating ‘Mates’ from these cities were both demanding respect.  This clash of titans for top Aussie city honors clearly needed to be settled and us Flashpackers arrived in Sydney to settle this debate.  We were on a mission to come to judgement on who is top dog between Australia’s largest pair of cities.

THE TALE OF THE TAPE –
Sydney is faster paced and has more hipsters.  Melbourne had a more laid back bohemian/ hippy vibe.  Sydney was more modern.  Melbourne appeared to have an older and dated look.  Sydney has much better weather.  Melbourne’s weather is schizophrenic and it’s weather is very unpredictable.  While we were in Melbourne we experienced three seasons (Fall, Summer and Autumn) with widely varying temperatures during the course of one single day.  There is a saying, “If you don’t like the weather in Melbourne, at least you won’t have to wait long for it to change”.

Australia is a multicultural society and both cities are true melting pots.  This international influence can be found in the amazing array of food from all over the world.  In Asia, every other storefront is a massage parlor.  In both Melbourne and especially Sydney, every other storefront is a place to chow down with an incredible variety of food from all over the world.  There is an abundance of casual food places that line the streets.  They sort of resemble fast food joints as they are ‘quick serve’ type places catering to foodies and yuppies on the move.  However, do not underestimate these ‘quick serve’ restaurants because they dish out unique, high quality international cuisine and certainly not the dog food served up in American fast food chains.  These restaurants are all reasonably priced and it seemed like in Sydney, they tended to be mostly every single Asian cuisine.  (Chinese, Japanese, Korean, Taiwanese, Malaysian, Thai, Indonesian…..etc.)  This is fine, if you’ve got a taste for it, but feels a bit limited in comparison to Melbourne’s more diverse European food on tap.  The Australian Heritage Hotel in Sydney serves ‘The Coat of Arm’ pizza which had a mix of toppings that included kangaroo and emu on it. Australia is the only country which eats their national animals!

Melbourne has a more artsy reputation and appeared to have a bit more culture.  The cafe culture in Melbourne is strong and everyone enjoyed sitting around shooting the shit while sipping on their lattes and eating kick ass brunches.  Live independent music at small local clubs is more prevalent in Melbourne.   Street art is noticeable all over the Melbourne when walking around.  The painted murals on the sides of buildings in the alleyways were really cool to check out.  I always wondered how the artists had the right to paint a mural on the sides of the buildings and what prevented others from painted over them with their own artwork.

Sydney definitely had more action and things to do being blessed with some of the finest urban beaches in the world.  The beaches that are spread along the coast, in and around Sydney blow away any of the beaches in Melbourne.  It is really no contest here.  Melburnians bike around the city as it’s an extremely bike friendly place.  We would wake up in the morning and it looked like a superhighway of locals on bicycles heading to work.  To get around Melbourne, they have cool ‘old school’ trams that run throughout the city.  All the trams in the Central Business District are free to use which was a pretty cool perk. Sydney residents use ordinary trains and buses to get around so they score no points here.

When all is said and done, in my opinion, Melbourne falls short of Sydney.  Sydney is way more modern and energized.  Melbourne’s vintage look and more relaxed atmosphere was cool to be part of but it felt we were in a time warp as the city appeared much older looking and a bit out of date.  Melbourne wasn’t Mayberry but sure felt like a throwback city when compared to Sydney.

So, if you had to pull the trigger on only one, send it in on Sydney.