Barbie and I had such a good time during our 2 week stay in Amsterdam last year, we pulled the trigger on a repeat visit.  We had finished up with our stint in Ireland and our flight to Southeast Asia was departing from Amsterdam’s, Schiphol Airport, so how could we not plunk down in our favorite city in all of Europe?

During our last visit, we elected to stay in an Airbnb apartment in the Jordaan area, just off of the Prinsengracht canal, in the main Centrum area inside the canal ring.  The neighborhood was perfect as it was close enough to bike/walk to all the tourist action in the Centrum area but far enough away from the masses to enjoy the peacefulness of the boutique- lined canals.  This time around, we were looking to experience a different Amsterdam neighborhood and we opted for the up and coming Indisch Buurt area in East Amsterdam.  The area had a plethora of ethnic restaurants and a bit more relaxed vibe than the city centre.  It was here that I was able to try my first authentic Iraqi meal.  The other benefit of the area was that it was strategically located near Oosterpark, one of our favorite parks in Amsterdam other than Vondelpark, Westerpark and Sarphatipark.   I cannot forget to mention, it is also a few blocks from one of our favorite coffeeshops appropriately named, Smoke Palace.  On our next go around in Amsterdam, and I am pretty confident that there will be a next ‘go around’, we spotted a good location to base in Amsterdam West, a few blocks north of Vondelpark.  The De Pijp area would be another good possible option.

During our last trip to Amsterdam, we rented bikes for our entire stay and it was a fantastic way to get around the entire city and was also great exercise.  The bikes enabled us to cover a great deal of ground but you really miss a lot of the action taking place on the side alleys and canals because we were constantly zipping around.  Amsterdam is probably the most amazing city to walk around as there is something to see around every single corner.  On this visit, we chose to walk which enabled us to wander in our stooper and leisurely stop at random places.  When we got tired of walking we took full advantage of the oBike system.  Amsterdam has the same oBike system as in Rotterdam where we were able to pick any bike off the street with the simple touch of the Obike App on our Iphones. 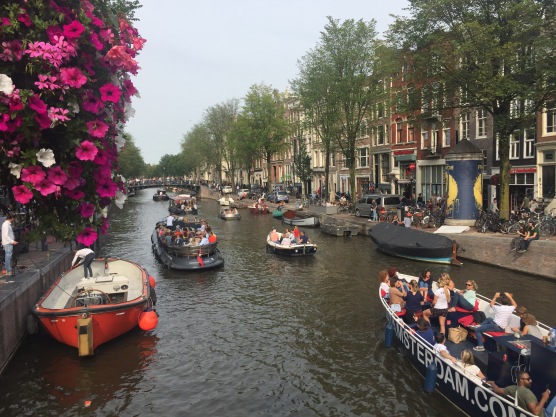 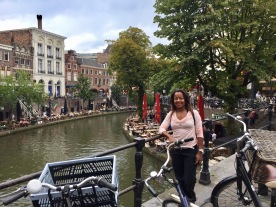 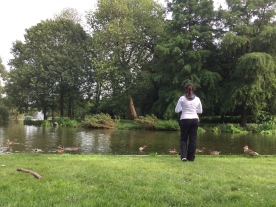 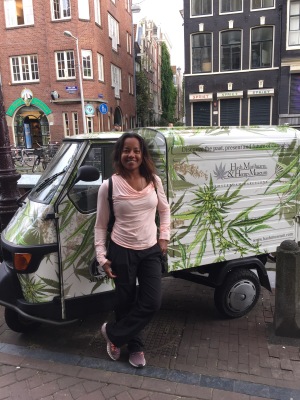 UTRECHT –
We did manage to motivate ourselves and get our lazy asses out of town for a day and paid a visit to one of the oldest Dutch cities of Utrecht.  We had already visited the Netherlands’ other two (2) smaller cities of Delft and Haarlem on our previous visits.  We enjoyed the small town life so much in all of these smaller Dutch cities, we felt a day trip to Utrecht would be worthwhile.  If I had to make a call on which of these towns we enjoyed most outside of our stays in the bigger cities of Rotterdam and Amsterdam, I would have to say Utrecht has a slight edge over both Haarlem and Delft.  Ultecht is just like a miniature version of Amsterdam and without the crowds.  While in Utrecht, we kicked started our day with a visit to Culture Boat.  This was a ‘must do’ prior to wandering into Giftpark to cool out and play around with the most tame and well groomed goats, lamb and cows inside the park at Kinderboerderij Griftsteede.  Good stuff and good laughs.  The main area of town with all the shops and restaurants is centered near the Oudegracht which is the main canal in town.  The outdoor restaurants located on a level below the street alongside the canals are really buzzing with action and have a lot of atmoshpere, especially if you catch a summer sunny day like we did.

THRU THE BINOCS –
There are about 180 coffeeshops currently operating in Amsterdam alone.  These coffeeshops sell marijuana to anyone over 18 yrs. old.  Most of these coffeshops really only cater to tourists as I was told the Dutch do no smoke a lot of pot.  Dutch drug policies are centered on the idea that people should make their own decisions about how they treat their bodies as long as they do so without harming anyone else and behave responsibly.  The Dutch have accepted that pot should be treated just like the use of tobacco and alcohol in the United States.  And, by this acceptance, the Netherlands has one of the lowest marijuana consumption rates in the world among it citizens.  One difference between SE Asia and here in Amsterdam is that in Asia, they will kill you with a shotgun to your head if caught with possession of any pot.  Here in Amsterdam, nobody gives a damn if you are getting baked alongside the canals or in the parks.  The smell of weed permeates the air every so often.  I will never forget zipping around the canals on our bikes with the occasional smell of pungent ganja in the air every time we rode passed a coffeeshop.  This relaxed lifestyle here just made me smile. 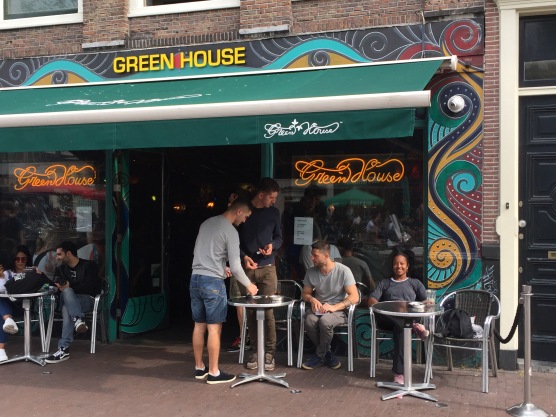 If you have plans to visit Amsterdam, make sure pay a visit to some of our favorite coffeeshops:
Smoke Palace
Greenhouse Cenrum
Abraxas
Prix d’Ami
Kashmir
Ibiza
Dampkring
de Kroon
Greenhouse Effect

Our time is up in Europe and we head to Japan for an extended visit.  To break up the long flight to Tokyo, we will be stopping in Bangkok, Thailand for a few days to get our backs cracked and muscles stretched while indulging in some $10/hr. Thai massages.